[I first met today’s guest blogger at the SCAR Cincinnati Exhibition in 2011. Amber Crouse was one of the about 20 SCAR girls who made that first exhibition outside of the Big Apple so freaking amazing. For me, it was life-changing. One of the things that struck the most beautiful chord, which I can still hear to this day, was the delightful pleasure and deeply felt honor of getting to see the sisterhood of the SCAR girls. They. LOVE. each other. David Jay has said The SCAR Project is really not about breast cancer but about humanity and the scars that unite us all. I find that to be… so beautiful and true… and The SCAR Project Exhibition… such a profound visual aid… because the SCAR girls (portraits) don’t just hang on the wall next to each other… the SCAR girls hang out together. Many of them hadn’t met in person before the Cincinnati exhibition but you would never know that they haven’t been friends forever. Their SCARs have united them and bound them together, much like the stars and stripes wrapped around the girls in the portrait below. A picture is worth a thousand words, but I know many are curious about the story behind the photo of the four women draped in an American flag. I know, for one thing, because I sure as hell was. For another thing, people are always asking me about it. Since I was lucky enough to catch up with Amber at the Birmingham Exhibition I asked her to share the F*ck C*ncer Posse story here. Their story, is to the SCAR girls story, is to the sisterhood of this bitch that is breast cancer. It’s the club you don’t ever want to sign up for, but once you’re in it, you don’t want to leave. It’s a lot like Hotel California I guess;) Beyond all that, the story of the F*ck C*ncer Posse, is to The SCAR Project, is to the humanity that unites us all. Thank you Amber for baring your SCARs and your story.]

When I was diagnosed with Breast cancer in June of 2006 I didn’t have anyone to talk to about it. I went to The Cancer Support Community to a support group made up of much older women. I was 34 at the time, and they were all well over 50. They were really great and I appreciated their encouragement, but I needed to talk to someone in my shoes. Someone my age.

Lucky for me, later that year I met Kate. It was a day I will never forget. I walked into the chemo room and was surprised to see someone my age. She was 35. Without any introduction she looked up at me and said something like, “Dang girl, how big ya going?”

I liked her immediately. I explained that my expanders were horrible. One was lower than the other one and you could set a beer on the shelf that was my left expander. I had to wear a very padded bra so you couldn’t see that mess which made me look like I was going for a size D on my size 0-2 frame. We ended up leaving the chemo bar (as my good friend and F*ck C*ncer Posse member Karson calls it) with my husband Steve and her boyfriend and went to have lunch. We started speaking on the phone regularly.

We had no idea that we had just started what would become a much larger group of young women with breast cancer in Knoxville, Tennessee.

In March of 2007 Kate and I met Melissa at a retreat for Breast Cancer survivors at one of our local hospitals. She had a hippie, music loving vibe to her and I knew we would be fast friends. Her nickname is Giggles. How can you not love a giggler? We started going to shows together and I took her to Bonnaroo while we were both still in treatment. Quite an adventure and endurance challenge. She is a dancing machine and so much fun to be around. We chat almost daily online and see each other regularly. We act a lot like sisters.

Not long after we met Melissa we met yet another Melissa, or Em, as we call her now. Both the Melissas are geologists. They both had friends volunteering in Africa who kept talking about a Melissa in Knoxville with breast cancer. They thought it was the same person but turns out it was two people with parallel lives. They arranged to have beers and catch a concert at a local bar. I met up with them and we talked, laughed, and danced our butts off. These days Em’s off teaching and finishing up her PhD in Oregon. We miss her a lot, but she came to visit recently, and we all got to ring in the new year with her. Of course it was a blast having the whole FC Posse together again.

Karson was next to be added to our Posse and our name derived from something her husband said. He was telling someone that he couldn’t or shouldn’t do something because his wife’s cancer posse would kick his ass. I’m sure it was something funny. Jason is a great guy and I wish I could remember what it was. We always said Fuck Cancer and so The Fuck Cancer Posse was born. Karson is now in the IV club, which means that she has stage IV metastatic breast cancer. Karson is an awesomely sweet, kind, and gentle soul. She’s our girl and we all love her!

Melissa had read the call for SCAR models on the Young Survivor Coalition page that David had posted. She contacted him and asked if we could do a group shot and he said yes. There were supposed to be 6 of us: Kate, Em, Melissa, Me, plus a couple more FC Posse girls: Karson and Brynn, who couldn’t make the trip to NYC for the photo shoot.

Two days before the 2008 election, we were in his studio taking our shirts off. David had the idea to drape us in the American flag. Three of us were not very keen on the idea for different reasons. But then he explained that we were on the eve of a very big election and he was hoping there could be a chance for universal health care. “Framing” our picture in that context, he said he wanted to show that here are these 4 women under 35 (2 under 30) in the greatest country in the world but there is no guaranteed health coverage for them. So we did it. And it is beautiful. (Thank you, David.) I’m so proud to be a part of it and to have these great women for friends.

Steve and I traveled to Birmingham, Alabama last week for the opening of The SCAR Project and The Alabama Project: The Civil Rights of Health Care at UAB’s Visual Arts Gallery. I was happy to meet new SCAR/BAMA sisters, and to see Vanessa, our SCAR sister that is in hospice care. Please check out The Live Sincerely Project and read Vanessa’s story, then take the pledge with The FC Posse to Live Sincerely.

I wish David’s wish had already come true and that we already had universal health care in place now. Strides are being made to try to get more coverage to more people in this country, but it is still not enough. To see these VERY young women struggling to get adequate care is infuriating. They deserve better. We all deserve better!

Amber, her SCAR/BAMA sisters, and David Jay
at The SCAR/BAMA Exhibition

We met Brigid almost 3 years ago when she joined The FC Posse. We became really good friends and she was my date for the SCAR Cincinnati opening. She has since become our SCAR sister as well. Brigid is sweet, lovely, a good listener, and a kick ass clothing designer. 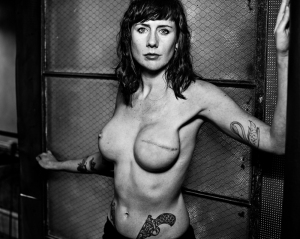 The clothing line Brigid makes, from tires, is as badass as her SCAR portrait. (But that’s another story for another day.)

No one really wants to join our Posse because you have to have cancer to be in it. But if you’ve got cancer, the F*ck C*ncer Posse is the group to be in. We’re all willing to chat with newly diagnosed ladies or gents, cook a meal or more for someone having surgery, give a ride to chemo or a shoulder to cry on. We raise funds and we throw parties. We do have “honorary memberships” for loved ones and caregivers. There are so many more great ladies in Knoxville (and beyond) that are part of our FC Posse like Sarah, Julie, Kristi, Brynn, our dearly departed friend Melissa who was our 6th Posse member, and there are many more… you know who you are. The FC Posse is always here for each other. The FC Posse has got each other’s backs. Click HERE to join the F*ck C*ncer Posse on Facebook.

Occasionally radioactive with a chance of superpowers. I use them to fight cancer. Also I write. My first book Shaken Not Stirred...a Chemo Cocktail is available on Amazon and Kindle. I'm currently working on a sequel to Shaken, a figuring out life after cancer/travel memoir about a bucket list road trip I took of Route 66.
View all posts by joulesevans »
« Previous post
Next post »